Finally… the moment my students and I have been wishing and waiting for – an updated movie remake of one of our favorite novels: Fahrenheit 451.  We always have a little fun playing the role of director, choosing which of our favorite actors and actresses should play Montag, Beatty, Mildred, Clarisse, and all the other memorable characters.  However, we do always wonder… would Bradbury actually approve of any screen adaptation of his magnum opus?  I had so many questions before watching HBO’s hot, new adaptation: Who would play Montag?  Would it capture the theme accurately? What would be removed or added? And most importantly… would it be a good fit for using in class?  Keep reading for the answers. WARNING: There are spoilers.

1) Characters/Characterization: Not everything about the characters was 100% spot on, but that is to be expected, I suppose.  So what works and what doesn’t?

2) Setting:  So much of what Bradbury penned was futuristic – and dare I say prophetic – in the 1950s.  Today, though, just about every bit of it has come to fruition, and what hasn’t can be computer generated for the movies.   I was pleased to see the infusion of the large screens; they are, in fact, everywhere: in homes, in streets, and even on the skyscrapers.  Bradbury’s biggest fear was the detrimental effects of people’s over consumption of and obsession with television. The TVs are ever present and “large and in charge.”  However, I’m not so certain the intended dystopian city that Bradbury envisioned really seemed “all that bad” in HBO’s version.   The setting, for me, kinda fizzled out.

3) OMNIS: This is a massive change from the book, but it may just be this detail that shows us – 2018 watchers of the film – how close we might actually be to Bradbury’s dystopian future.  OMNIS holds every piece of literature, art, and history in a DNA strand, preserving the long forgotten culture that the firemen tried to erase.  While there are underground members of society, like Granger and his “railroad” crew that memorize entire books in order to preserve them, it is this OMNIS that they work to protect and preserve. Once the OMNIS is introduced into the plot, it becomes the major source of the conflict, as it is the focus of the firemen’s revenge.  The twist is that this DNA strand has been implanted in a bird.  After some thought, I decided I might be satisfied with this change as I see connections with it and the prominent role of the Phoenix in the novel.   OMNIS becomes a symbol of hope in a bleak, literature-loathing society that hints at the emergence of a better future. It’s a reminder that it doesn’t matter how much “graffiti” (books) the firemen decide to burn, there’s still hope out there for a free-thinking future — much like the Phoenix that is burned but rises again.

4) Theme: Ultimately, Bradbury wants readers to put themselves in the characters’ shoes: What role would you have played in this dystopian universe: perpetuator, bystander, fighter? Would you see the truth like Montag, or continue to fumble your way through the pursuit for happiness like Mildred. Would you fight to manipulate and cover the truth like Beatty or use truth to lead others to it like Faber or Granger?  It is the growth from within that he wants – that really can bring the change that this culture needs. Truth, knowledge, morality — all erased and replaced with what people see rather than what they think.  The movie does a good job of making that clear — maybe a little too clear (some points didn’t leave much to the imagination), but in order to bridge the gap to “modern audiences,” I can see the need.  Maybe that’s a tad ironic, and telling, in and of itself.  Nonetheless, tons of lines from the book are woven throughout, and I enjoyed hearing Bradbury’s voice.

5) The Ending: Bradbury’s ending is open, or so many of my students say, and most really do hate that.  I always pose the question to them, though, Is it really open ended? Throughout the entire book, Bradbury wants readers to realize that the value of books is to provide information, but more importantly to make people think.  On one hand, the open ending forces readers to do that. On the other hand, maybe the ending so open at all. Montag did figure out his purpose, and if you read it that way, then what else was there?  Either way, the movie definitely provides us with Bahrani’s idea of what he thought should be Montag’s purpose: keep the “books” alive.  But die?  I could see a case for his death in the book, but die at the hand of Beatty.  That idea should be torched.  In the movie, the books “rise from the ashes” to live on and that offers some hope, but having Beatty kill Montag gives the villain way too much power, and erases hope that the books — and future — will really be safe.   To link in another once “hot” film, President Snow said, “Hope, it is the only thing stronger than fear.  A little hope is effective, a lot of hope is dangerous. A spark is fine, as long as it’s contained.” (Sidebar: Does anybody else see the HG connections? I can’t unsee it.)  If Bahrani intended to remove that hope, that’s dark and maybe it’s a little too dark.  But perhaps that’s just me trying to look on the bright side.

Final thoughts: Is it appropriate for class?  HBO rated the film TV-MA for violence and language.  That said, just about any novel we pick up is going to have violence and language or worse.  I am not a fan of it either, and I don’t want to convey that at all.   Otherwise, it’s pretty benign. All in all, I did think it was time well spent showing it to my students. It brought up so many conversations; and we really did decide that the book is better.  It doesn’t get much better for my little English-teacher heart.  In my school, anytime we show a film, we have to get our principal to approve it.  So, I did that, and I wrote a parent letter and created a set of questions student would answer during the viewing.  He was fine with that, and I had zero parents ask for an alternative assignment.  I do have older students, but if you cover your bases this way you should be fine.  (See my Teacher Talk Video on Facebook here about dealing with novels with difficult content.)

Get the letter I drafted and the questions HERE for free! 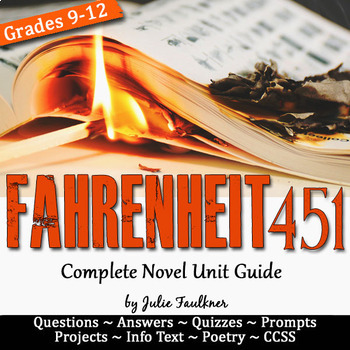 If you teach Fahrenheit 451 as a novel unit, stop over to my teacherspayteachers store and take a look at my complete unit plan. Also, did you enjoy the memes above? I have to brag on my students. Those were all their original work, and I have to admit, I laughed out loud at most of them.

Sign up for my monthly newsletter – “Teaching Tidbits” – that is delivered directly to your email inbox each month.  Each month you’ll get announcements, tips for teaching, updates on new and revised resources, and, of course, an email-only exclusive FREEBIE! Just for joining, you’ll receive a free gift: Worksheet Analysis Sampler for a Variety of Texts.

In honor of the past couple of weeks being WILD (to put it nicely)... this outfit. 😂 Thanksgiving Break, where are you? #teacherstyle #teacheroutfitoftheday #teacheroutfit #teacheroutfitideas
#discovermaurices #bornshoes ... See MoreSee Less

My lesson plans for next week are written and my desks are wiped. But that’s not even close to what else is on my to-do list, and I’m going home anyway. #teachertired #happyfriday #feetupfriday #rothysinthewild #rothyschelsea #bridgebygly #teachersarehumans #teacherlife ... See MoreSee Less

This is my staple winter outfit and especially for

Welcome, friends to the holiday season! Do you see

Happy Thanksgiving from my table to yours! Blessin

Grab a leather moto jacket and go! This is my favo

If Fahrenheit (or any book) Had an Instagram: Her